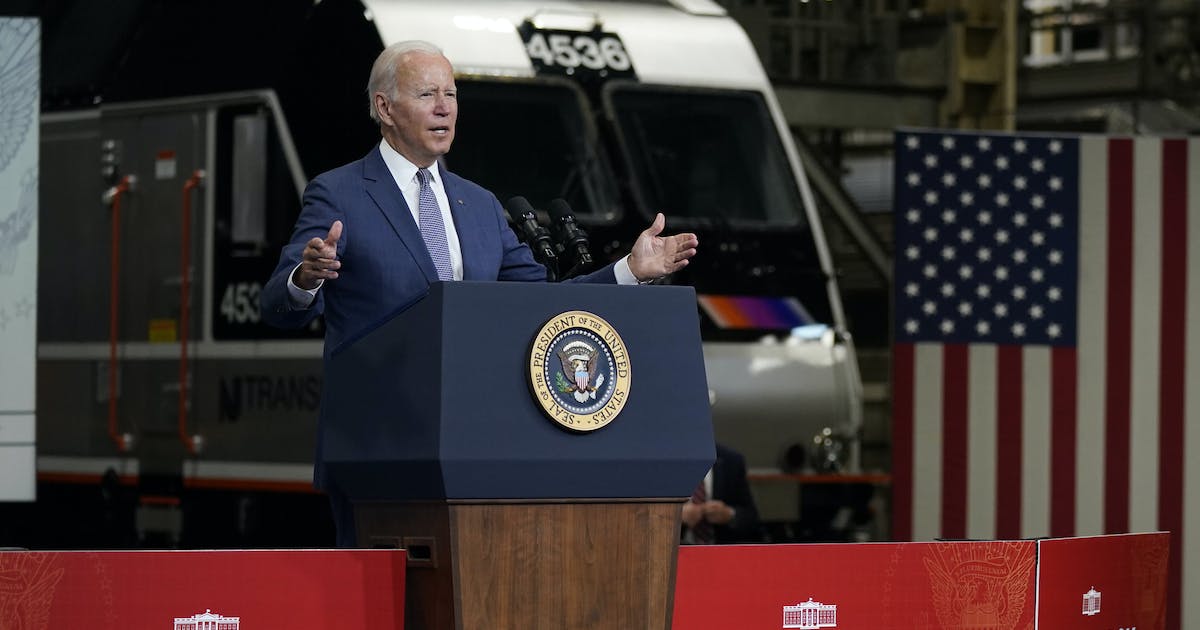 The Biden administration is touting what it describes as a host of benefits for Minnesota — ranging from child care and early education to tax cuts — that would be made possible by the president’s Build Back Better framework.

The White House released a fact sheet Friday saying that the $1.75 trillion framework announced this week would “bring down costs that have held back families in Minnesota for decades by cutting taxes and making child care, home care, education, health care and housing more affordable.”

The new framework released by the White House came after it became clear that a more wide-ranging and ambitious $3.5 trillion tax and spending plan didn’t have the swing votes in the Senate that it needed to pass.

But the push for a major spending bill focused on social and climate programs has also continued to delay the House vote on a roughly $1 trillion bipartisan infrastructure package that passed the Senate back in August.

Progressives have flexed their influence in Congress in the debate surrounding the two packages, and Democratic U.S. Rep. Ilhan Omar tweeted Thursday there would be no vote on infrastructure “until we vote on reconciliation.”

“The Build Back Better Act is one of the most historic and meaningful pieces of legislation in my lifetime, and I am proud to have worked hard as a member of the Education and Labor Committee and Whip of the Progressive Caucus to make it a reality,” Omar said in a statement Friday. “It meets so many of the needs I hear about every day when meeting with Minnesotans.”

Tensions among congressional Democrats appeared to be building, however. U.S. Rep. Dean Phillips was one of only four House Democrats to vote against a short-term extension bill Thursday focused on surface transportation programs.

“While the bill is far from perfect, it is the result of negotiation and compromise, which is exactly how our system is designed to work,” Phillips said Friday. “We now have an opportunity to restore Americans’ faith in their government through meaningful action, and I look forward to joining my colleagues in supporting this historic package.”

But Republicans such as Rep. Pete Stauber continue to paint the framework as a “socialist spending scam” that would prove harmful.

“Specifically, this package implements one of the largest tax increases in our nation’s history,” said Stauber. “Make no mistake, this bill will hit working families the hardest by raising taxes and causing inflation to soar even higher,”

On Friday, the White House outlined a list of 10 benefits in the plan for Minnesota. It said the Build Back Better framework would open access to child care for 383,600 children up to 5 years old and would expand access to universal, free preschool for more than 162,000 3- and 4-year-olds.

The agenda calls for raising maximum Pell Grant awards by $550 for students at public and private nonprofit institutions, and for training programs for jobs in fast-growing sectors. It also grants access to free school meals to 3,000 more students and adds food in the summer.

The White House said the framework’s plan to put the country on track to reduce greenhouse gas emissions in nine years to about 50{17904359e11cbfc70ac4d65bb875d3d2975e2e10411d6a84f2c5acc6e507ba2f} below 2005 levels could help forestall extreme weather events that have cost Minnesota $10 billion in damages in the past decade. Omar pointed out Friday that the package included her bill to transition away from toxic landfills.

U.S. Sen. Tina Smith on Friday hailed the framework for addressing a top priority of hers — climate change — “by reducing carbon emissions and putting the United States at the forefront of the clean energy transition that will create jobs and new opportunities.”

The administration said that about 39,000 uninsured Minnesotans would get health coverage under the new framework. And it promises tax benefits: it would extend the Child Tax Credit’s $250 to $300 monthly increases and allow families most in need to continue receiving the full tax credit. It includes a tax cut of up to $1,500 for 276,000 low wage workers via an extension of the American Rescue Plan’s Earned Income Tax Credit expansion.

Rep. Angie Craig, D-Minn., is behind a bill to create a federal reinsurance program that’s included in the package. She said Friday that both the infrastructure and Build Back Better plans would “create millions of good-paying jobs across Minnesota and across the country.” She noted that the bill was not yet final and said she would “keep fighting” to lower drug costs in the House version.

“It’s a damn shame that there aren’t enough people in this town willing to stand up to Big Pharma and other special interests to lower the cost of prescription drugs for our constituents,” Craig said.