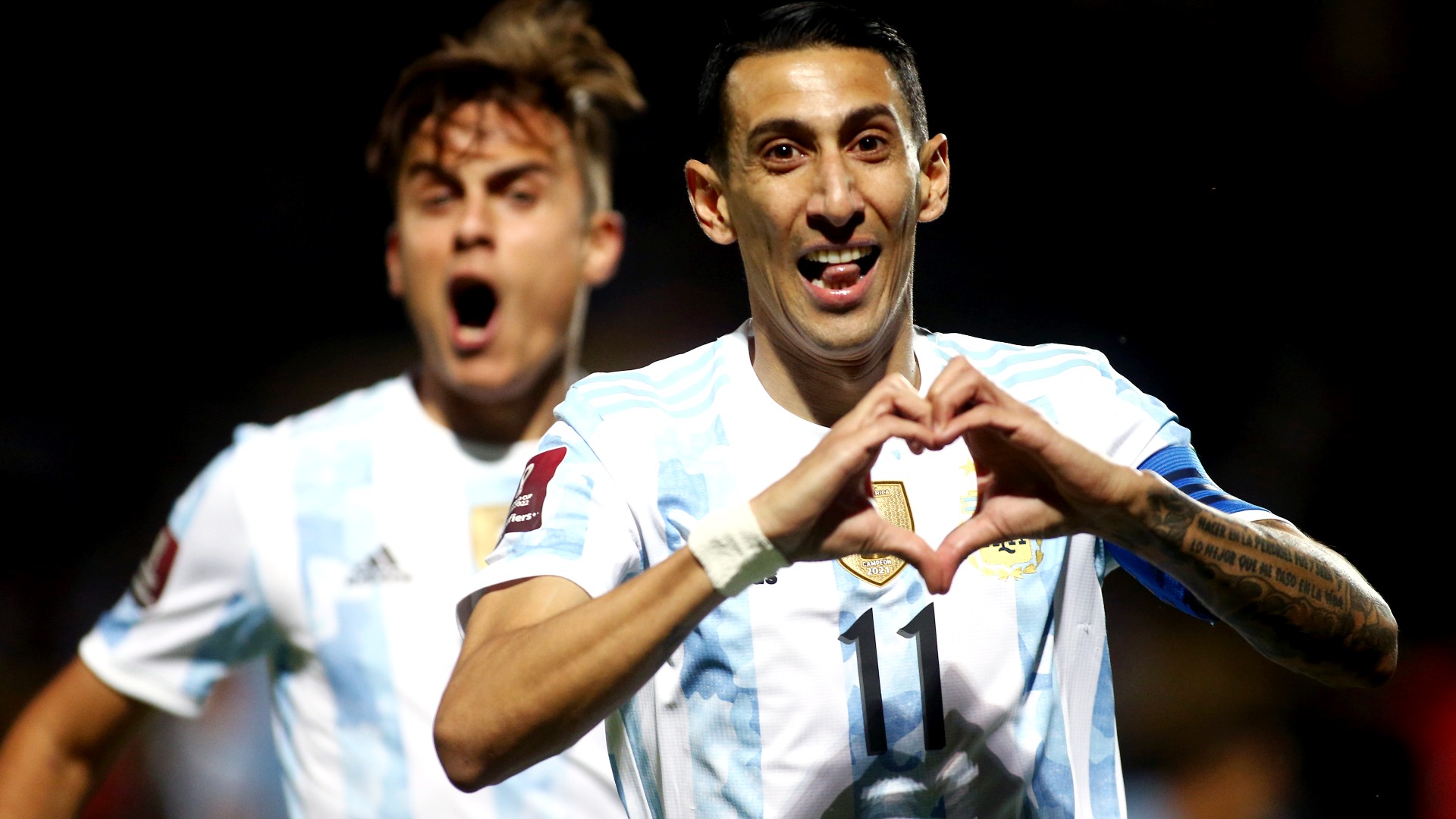 Argentina will be a dangerous team when it finally qualifies for the 2022 FIFA World Cup in Qatar because it can win in so many ways. It moved closer to booking that ticket with a hard-fought 1-0 in Uruguay and it didn’t even need superstar Lionel Messi to carry it this time.

The Albiceleste (2nd, 28 points) scored a gem of a goal through Angel Di Maria, who wore the captain’s armband in Messi’s stead, and then held on for the shutout although Uruguay had it against the ropes on multiple occasions. Goalkeeper Emiliano ‘Dibu’ Martinez was the standout for Argentina with several surehanded stops throughout the night as Uruguay tested him with several attacking flurries, outshooting Argentina 19-7.

Messi, who recently missed matches for his club team Paris Saint-Germain due to hamstring and knee injuries, started on the bench and entered for the final 15 minutes. It was more of a warmup stint for Messi, who didn’t need to do much with Argentina sitting back and absorbing the Uruguay pressure.

It was a disappointing result for Uruguay, which was left stuck in sixth place in a logjam of teams fighting for fourth- and fifth-place. Only the top four teams earn direct berths to Qatar 2022, while fifth-place earns a spot in a play-in series. Uruguay forward Luis Suarez hit the post in the first half, Matias Vecino came close and Agustin Alvarez had two decent looks toward the end of the match, but a decimated Uruguay team could not find a way to get on the board.

Argentina, which won the Copa America over the summer, extended its unbeaten run to 26 matches and counting. Next up is a must-watch match against qualifying leaders Brazil on Tuesday.

90th min.: Four minutes of stoppage time. Argentina is going to find a way to pull this out. Incredible.

86th min.: Another Alvarez shot. But Dibu Martinez, who’s the MVP of this game for Argentina, stops the hard drive.

84th min.: Header in the box by Augstin Alvarez, but he can’t direct the ball at goal. Uruguay making a final push.

76th min.: Joaquin Correa with another chance. He touches a cross from Molina and the shot is stopped by Uruguay ‘keeper Muslera.

74th min.: Argentina comes close to a second! Uruguay’s Rodrigo Betancur makes the incredible recovery run against Joaquin Correa, who was in alone on goal. It was a great tackle in his own box by Betancur.

67th min.: Messi is warming up. The jacket did come off.

64th min.: SUB — Before the corner kick, Uruguay brings on another young attacker in Agustin Alvarez.

63rd min.: A deflected cross by Facundo Torres veers toward the crossbar and Dibu Martinez tips it off the bar and out.

62nd min.: Cameras just showed Lionel Messi on the bench and it doesn’t look like he’s coming into the match. He has his jacket on.

59th min.: The Argentina subs are already paying off. Papu Gomez goes solo at the Uruguayan defense and he hits a shot that finishes wide right.

55th min.: SUBS — Angel Correa and Papu Gomez are on for Di Maria and forward Lautaro Martinez. So all three Argentina forwards are now out of the game.

53rd min.: Luis Suarez goes down in the box! Uruguay wants a penalty kick, but the referee doesn’t give it. Replays show that Suarez want down easy. Uruguay is buzzing all over the field.

50th min.: It’s all Uruguay to start. Joaquin Piquerez gets into the act with a run into the box from his left back position and gets another shot off.

48th min.: Yellow for Martin Caceres who clatters into Giovano Lo Celso from behind. Lo Celso was always losing that battle against the taller and stronger Caceres.

47th min.: And already a shot for Uruguay and a save from Dibu Martinez.

46th min.: We’re off. One sub for each team: Joaquin Correa is on for Paulo Dybala and Penarol’s Facundo Torres is on for Uruguay’s Brian Rodriguez.

Halftime: After a strong start by Uruguay which forced Argentine ‘keeper Dibu Martinez into a big early save, the visitors found their goal on a gem from Di Maria on the only shot of the game for Argentina so far. It took a bit for Uruguay to find its footing after the blow and Argentina was happy to control possession. But with hard-working Luis Suarez leading the way, Uruguay was able to battle its way back and arguably deserves a goal based on its performance thus far. The Uruguayans hit the post and saw Dibu come up with a couple of sure-handed stops. The Argentine back line in front of him is also playing well. There’ll be plenty more defending to do in the second half.

42nd min.: Uruguay’s Matias Vecino gets into the box, receives from teammate Luis Suarez and takes a shot, but Argentina’s goalkeeper is up to the task. The last 10 minutes have been all Uruguay. When the home team throws numbers forward, it’s causing Argentina issues.

37th min.: Argentina center back Cristian ‘Cuti’ Romero is having himself a game. He has singlehandedly stopped several Uruguayan attacking moves. His reactions are incredible.

31st min.: Luis Suarez hits the post! The ball falls to him just outside the box and he fires a bouncing first-time shot on goal which goes off the left post. The rebound comes back to him, but he can’t get the follow-up on target. Suarez can create something out of nothing.

24th min.: Now Argentina is dominating. The midfielders are just knocking the ball around and Uruguay can’t stop them. This could be a long night for the home team. The crowd is silent.

18th min.: Yellow card to Paulo Dybala for a late challenge just past midfield. Meanwhile, check out this shot taken on the Di Maria goal:

14th min.: Luis Suarez shot! The ball reaches him on the right side of the box and after a touch his attempt finishes against the side netting. The Argentine defenders closed him down fast.

10th min.: Set piece for Uruguay and Luis Suarez takes it, but he curls it high.

7th min.: What a goal for Argentina! Angel Di Maria scores with a perfectly-placed left-footed shot into the far left corner. Paulo Dybala wins the ball off left back Joaquin Piquerez, and he feeds Di Maria, who scores an absolute beauty.

5th min.: What a save by Dibu Martinez! After a long throw-in Argentina’s defenders fail to clear their area, and the ball falls to a wide-open Nahitan Nandez who can’t beat the Argentine ‘keeper.

4th min.: The first danger of the match is created by Uruguay, which earns a corner kick, but nothing comes of it. Brian Rodriguez is active early for Uruguay down the left wing.

1st min.: After a minute of silence, the match kicks off.

5:45 p.m.: Messi approves of the field surface at the Estadio Campeon del Siglo during warmups:

5:34 p.m.: Whistles greeted the Argentina team taking the field for its pregame routine.

Uruguay squad has been decimated by injuries (10 absences). Suarez is leading the line against Argentina; he will be accompanied by LAFC winger Brian Rodriguez and Cagliari playmaker Nahitan Nandez.

How to watch Uruguay vs. Argentina

The live broadcast of the Uruguay vs. Argentina World Cup qualifier can be found exclusively  on fuboTV . New users can get fuboTV with a free 7-day trial .