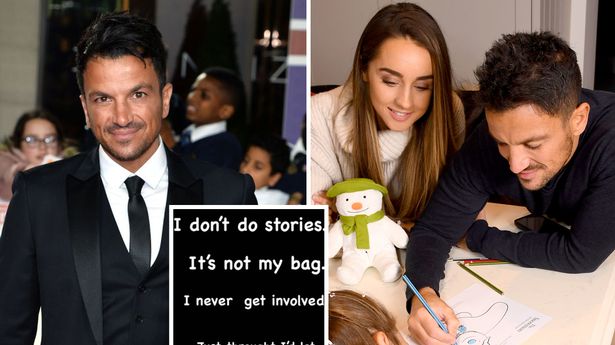 Peter Andre has made a rare public acknowledgement of his ex wife Katie Price, after she accused her exes of ‘making money’ from her in the press.

The Mysterious Girl singer, who had two children with the former glamour model before moving on with current wife Emily, took to Instagram to share a barbed remark at the recent allegations.

Posting to his Story, Peter wrote “I don’t do stories. It’s not my bag. I never get involved.

He finished his post with “Nice try though” followed by a smiley face to show his apparent amusement at the situation.


Peter Andre said he would ‘never’ sell stories about his ex
(

Peter’s ex wife Katie has been back in the headlines this week after jetting off to Las Vegas and obtaining a marriage licence to marry her current partner Carl Woods.

During her escapades in Sin City, Katie hit out at Peter and her third husband Kieran Hayler and accused them of ‘making money’ from her.

“I’m asking you both kindly to leave me alone now and stop making money from my name,” she posted.

Peter has rarely spoken about Katie publicly since their divorce in 2009.

He did however, make a rare exception to the rule on their son Junior’s 15th birthday last year.

The duo stunned fans by making cordial remarks about their co-parenting across Instagram.

The surprising love-in came after Katie shared picture of her planting a kiss on Junior’s cheek to Instagram to celebrate his special day online.

“So proud of the young man he’s turning out to be his dad and me have a done a good job,” remarked Katie in the caption.

Peter then shocked Katie’s followers by replying publicly to her post: “He’s a good boy. I’m so so proud.”

When one follower praised Peter for being amicable with his ex-wife, he replied: “we’re friends and she’s mummy so of course.”

Peter and Katie had a brief and tumultuous marriage
(

While Peter has kept quiet as Katie prepares to embark on her fourth marriage, fans believed her third ex husband Kieran Hayler had made a thinly-veiled jibe with a recent Instagram post.

The 34-year-old has two children – Bunny, seven, and Jett, eight – with his former spouse appeared to slam Katie in a tribute to his new partner Michelle Penticost.

Kieran posted a picture of the two of them together, where he called Michelle his “absolute world” and described her as the “perfect role model” for his kids.


Katie Price is in Las Vegas with her partner Carl Woods
(

He penned: “Happy birthday to my absolute world. 40 years old and not looking a day past 30 yes I am bloody lucky.

“Yes I may not be perfect, and my life comes with many ups and down but having the perfect side kick to stand by me no matter what life throws at us is all I can ask for.”

Kieran went on to thank Michelle for being a wonderful mum and a step-mum in an apparent dig to his ex Katie.

“Michelle you are my best friend, my soul mate, and my rock. You stand by me no matter what in every decision I take,” he added

He is now engaged to Michelle Penticost

“You are the perfect role model for my/our children, I asked you to be my fiancée because I want to grow old with you and continue our laughs and life together. I hope you enjoy all I have in store for you and your big day.”

Kieran and Katie split in 2017 amid allegations of cheating on his part.

Katie later moved on with Kris Boyson, to whom she got engaged, before finding love with car dealer Carl Woods.