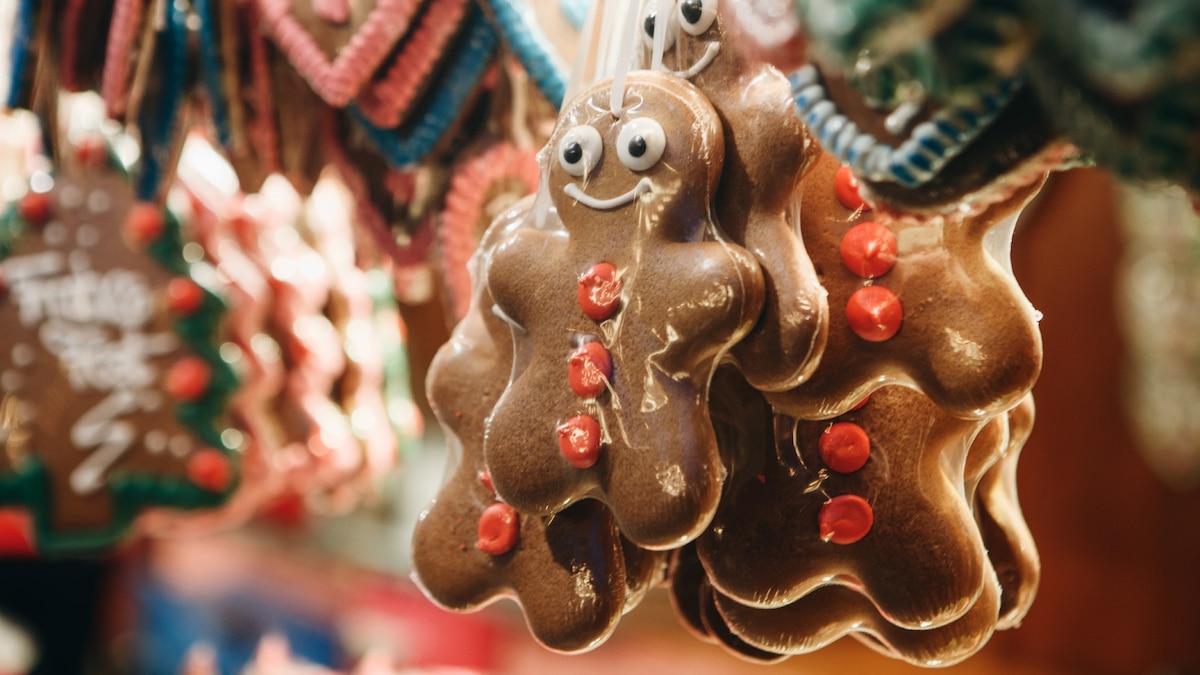 But for the second year in a row, Germans face another holiday season without this quintessential Christmas tradition. As COVID-19 cases surge across Europe, cities in Germany are canceling their markets, just days before they were scheduled to open.

Some historians say that the possibility of another year bereft of Christmas cheer in city centers only underscores the importance of this cultural practice. They argue that Germany’s markets should be inscribed on UNESCO’s intangible cultural heritage list, alongside Turkish coffee culture, Jamaican reggae music, and summer solstice fire festivals in the Pyrenees.

“What makes [the markets] so important isn’t just buying an ornament,” says Dirk Spennemann, associate professor in cultural heritage management at Australia’s Charles Sturt University, who has co-written studies about the cultural heritage of Christmas markets. “It’s this whole experience of sound, smell, visuals, but also the physicality of people around you.” What’s more, Spennemann argues that “intangible cultural heritage” encompasses traditions that are meant to be mutable, reshaped with each new generation.

Christmas markets certainly fit that definition. Over their centuries-long history, they have adapted to the changing politics and social customs of each new era—from the industrial revolution to the rise of the Nazi party.

Europe’s Christmas markets date back to medieval times, when German territories covered a wide swath of the continent. Some of Germany’s existing Christmas markets trace their origins as far back as the 15th and 16th centuries. Dresden’s market first opened for one day on Christmas Eve in 1434. Meanwhile, the oldest evidence of Nuremberg’s Christmas market dates it to 1628, though some suspect it stretches back at least to 1530.

Spennemann says it’s unclear, however, whether these early bazaars were held for Christmas or simply took place at Christmastime. Back then, people lived in scattered communities within walking distance of a church that held markets for all religious feast days. The winter market was typically the biggest, with local artisans selling pottery, meat, baked goods, and maybe some sweets, if the sugar wasn’t too expensive.

There’s little record of the atmosphere of those early markets or when they shifted to offer Christmas trees, Nativity scenes, and toys. Some illustrations depict wealthy Germans hobnobbing in the main market square, while the poor shopped at back-street stalls. But Spennemann says these images are likely embellishments created by artists of later eras, who yearned for what was—to them—an idyllic Christmas past with each social class in its place.

The Industrial Revolution had a profound effect on Christmas markets in the early 19th century. The rising standard of living and the emergence of the working class fueled the growth of Christmas markets. In Berlin, for example, the Christmas market grew from 303 stalls in 1805 to about 600 in 1840.

As the markets began to cater to the working class, urban elites turned up their noses at the cheap gifts for sale, while police in cities across Germany complained about the unruly masses of workers who frequented them.

“It was seen as being seedy, even dangerous and threatening,” says Joe Perry, associate professor of modern European and German history at Georgia State University and author of Christmas in Germany: A Cultural History.

Capitalist forces also turned against the markets by the end of the 19th century. The owners of new downtown department stores campaigned to have them moved to avoid competition. From Berlin to Nuremberg, cities relocated their Christmas markets to the outskirts, where they would languish for decades.

In the 1930s, Christmas markets returned to city centers across Germany—with the aid of the Nazi Party.

Christmas was a political football at the time, with politicians endeavoring to reshape its traditions to fit their anti-capitalist or atheist leanings. When Adolf Hitler became chancellor in 1933, his newly empowered political party wasted no time in transforming Christmas from a religious holiday devoted to peace on Earth to a nationalist one that extolled German heritage. As Erin Blakemore writes for History magazine, party officials inserted Nazi imagery into Nativity scenes, filled Advent calendars with party propaganda, and rewrote Christmas carols like “Silent Night” to deemphasize its Christian connotations.

These efforts weren’t unprecedented. Perry points out that the idea of a culturally German Christmas has “deep, deep roots.” Many traditions, from Advent calendars to Christmas trees, are thought to have originated in Germany. Protestant reformer Martin Luther is often credited with being the first to put lights on the Christmas tree, after a nighttime stroll through a German forest under a starry sky.

(Why do we have Christmas trees?)

Christmas markets were a natural fit in the effort to realign Christmas with Nazi ideology because they were a popular tradition that already existed. In Nuremberg, for example, Nazi mayor Willy Liebel moved the market back to the city center in 1933, as “a way to erase what he called the ‘un-German and race-alien influences’ that had inspired the market’s relocation,” Perry writes in his book.

The market also debuted an opening ceremony featuring the christkind, an angelic figure typically portrayed by a blond-haired, blue-eyed local girl. Berlin reopened its Christmas market the following year, with speeches from Nazi leaders, such as Joseph Goebbels.

Soon after, Nazi politicians began to standardize stall decorations and the items that vendors could sell—such as German-made ornaments, toys, handicrafts, bratwurst, and sugary confections.

Economics drove part of these efforts to rejuvenate the markets, says Perry. In the midst of the Great Depression, Nazi leaders believed the sales of German-made goods could help stimulate the economy and raise the spirits of German citizens.

(Veterans and survivors reflect on the 75th anniversary of V-E Day.)

Germany’s Christmas markets came roaring back after the end of the war—and only grew in the following decades, as an economic boom in the 1960s and 1970s and the rise of consumerism fueled the growth of Christmas shopping. These economic shifts transformed the Christmas markets into mass cultural events—up to a thousand tour buses full of shoppers might descend on a city’s Christmas market during any given weekend.

The Nazi’s role in reshaping the Christmas markets was largely swept under the rug, even as many of the traditions they instituted remained. When Nuremberg’s market returned in 1948, so did the christkind, albeit with a new prologue, or welcoming speech. (However, the role would continue to be given to white actresses until 2019, when the selection of a biracial teenager prompted racist outrage from far-right politicians.)

While some Germans sought to trivialize the Nazis’ role in shaping the Christmas markets, Perry points out that other German political parties through the years have sought to influence the tradition. In the early 20th century, Marxists had tried to reframe Christmas as a pagan rather than a religious holiday. Later, the Communist Party in East Berlin would also attempt to align Christmas with its values. Christmas “has always been pushed and pulled around,” he adds.

By the 1980s and 1990s, Germany’s Christmas markets had become so beloved that they became a cultural export. Cities in countries around the world—including the United States, Japan, and India—began to host their own German-style Christmas markets, complete with bratwurst, glühwein, and twinkling lights. In the United Kingdom, the number of Christmas markets more than tripled from about 30 in 2007 to more than a hundred in 2017.

(In Japan, Beethoven’s “Ode to Joy” is a Christmas carol.)

In Germany, meanwhile, the number of Christmas markets has also been on the rise for the last 50 years—tripling from about 950 markets in the 1970s to about 3,000 in 2019. Local tourism bureaus use them to persuade people to visit during winter’s bleakest days, and tour companies have expanded from bus tours to Christmas market river cruises that stop in cities along the Danube, from Germany to Hungary.

Left: In 2021, Christmas market stalls won’t line the marketplace in front of Esslingen’s old town hall. Like many cities in Germany, the town has had to cancel its Christmas market amid rising COVID-19 cases.

Right: Wafting scents of baked goods like these traditional German cookies are among the immersive experiences that make Christmas markets an intangible part of the country’s cultural heritage.

But the pandemic interrupted all that in 2020. Although many cities attempted to recreate the markets through virtual reality portals and drive-through stalls, Spennemann and Parker argue in a study published in the journal Heritage that the lackluster response to the substitute Christmas markets highlighted the importance of the real thing.

“Clearly substitutions don’t work,” Spennemann says. “Unless you go and give people the virtual 3D experience and send them a vial of smells, it’s not going to work.”

By documenting the history of the Christmas markets, the scholars hope to lay the groundwork should Germany decide to apply for UNESCO recognition. But Spennemann says that safeguarding the markets doesn’t mean keeping them from changing—it’s to keep them alive through change.

Some people, he says, insist that traditional German culture must involve wearing lederhosen and drinking from steins, but “they deep-freeze culture, and they ritualize it, and they kill it. Intangible culture is a vibrant expression which will change. So you have to allow for that change.”

In fact, he argues that intangible cultural traditions like the Christmas markets are so meaningful because they have evolved to represent who we are at any given time—for the better and, yes, sometimes for worse.

Amy McKeever is a senior writer and editor at National Geographic. You can find her on Twitter.