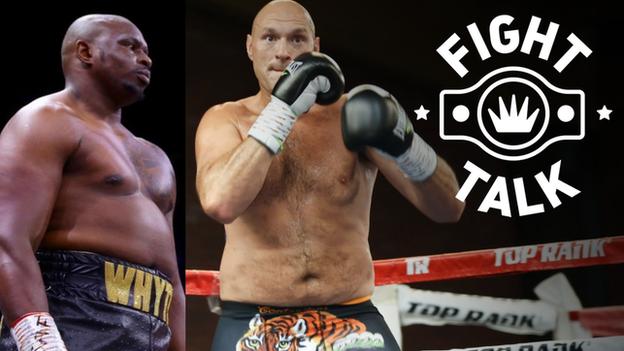 Tyson Fury v Dillian Whyte looks set to be ordered this week, but will the WBC heavyweight champion vacate his belt or will his fellow Briton finally get his title shot? Plus we reflect on a shocking night for British boxing on Saturday and react to news Amir Khan and Kell Brook may finally get it on, albeit at least six years too late.

Fury-Whyte to be ordered on Tuesday?

Entertaining in and out of the ring, unpredictable press conferences and verbal exchanges like we’ve never seen before – Tyson Fury v Dillian Whyte is expected to be ordered this week and we cannot wait for all that the blockbuster all-British heavyweight meeting would bring.

With WBO, WBA and IBF champion Usyk set for a rematch with Anthony Joshua next, no such deal could be struck with the Ukrainian and the deadline has now passed.

Whyte, meanwhile, was set to fight Swedish southpaw Otto Wallin – beaten by Fury in 2019 – in October but withdrew through injury.

The WBC convention is set to take place in Mexico on Tuesday and it is likely Fury will be ordered to take on Londoner Whyte, who has pleaded with his rival to take the fight…

Any suggestion Fury – who has a record of 31 wins and one draw – may ‘run’ by vacating the belt or perhaps even retire from the sport were quashed by his assistant trainer Andy Lee.

“He likes the Dillian Whyte fight; he is enthused by that, that’s what he is talking about to me so I can see that being the next one,” Lee told Talksport.

Can Whyte shock the world?

Fight fans were denied a Fury-Joshua super-fight last year, with the bout all but signed before falling through.

While Fury-Whyte may not have the same global appeal, they are two of the biggest characters in the division.

In the build-up, Whyte is likely to entertain with a combination of dry wit coupled with an aggressive demeanour, while Fury – who once turned up to a press conference dressed as Batman – is always box office.

There is no love lost between the two men, having exchanged verbal blows over social media for some time.

Whyte has previously labelled his opponent a coward and also claims he once knocked Fury out in sparring. Fury has described Whyte as “chinless” and has promised to “smash him to bits”.

And those are some of the more pleasant words they have directed at each other.

As for the fight itself, Fury – on paper – will undoubtedly go in as a heavy favourite, but Whyte’s relentless come-forward style is always a threat.

The Londoner lost to Joshua in 2015 and was knocked out by Russian Alexander Povetkin in August 2020, before avenging the loss with a stoppage win in the rematch in March.

Whyte’s trainer, Xavier Miller, expects his fighter to put on a show for his long-awaited world-title shot.

“He hasn’t had a chance to fight for a world title or win a world title. He’s a very hungry fighter and a very dangerous fighter. Of course, I am extremely confident,” Miller told Talksport.

The general feeling among boxing fans, however, is Fury’s ring craft and boxing skills will be too much for Whyte… 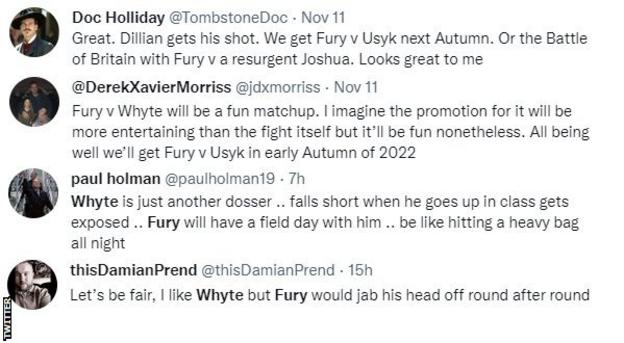 Whether Whyte can upset the odds will be a theme of the build-up, while the location of the fight – perhaps a Manchester homecoming for Fury or a fight to light up the Las Vegas strip – will also need to be determined.

A shocking night for British boxing

British boxing lost two world titles in the space of an hour on Saturday night in Sheffield.

First, American Alycia Baumgardner stopped Terri Harper in the fourth round to claim the WBC super-featherweight title and inflict a first career defeat on the Doncaster fighter.

And then, in one of the biggest shocks of 2021, Sheffield’s Kid Galahad suffered a devastating defeat in his maiden defence of the IBF world featherweight title, losing to a brutal knockout in the sixth round by Spaniard Kiko Martinez.

Boxing is a career choice which can demand years of sacrifice, often with little reward, but 35-year-old Martinez – who moves to 43 wins, 10 defeats and two draws – is now a two-weight world champion.

Promoters, fellow fighters and those involved with the fight game were overjoyed for the veteran…

Harper told fans on social media she was “fine, just heartbroken” and congratulated her opponent on the victory, before jokingly adding she was “off back to the chip shop” she worked in before winning the world title.

Galahad, real name Barry Awad, was also gracious in defeat, thanking his fans and vowing to bounce back…

‘Fans fell asleep on this one’ – Khan & Brook to finally settle feud?

Kell Brook defends his IBF world welterweight title with a fourth-round victory against Romanian-born Jo Jo Dan and calls out a British rival.

“If Amir Khan is watching, give everyone what they want,” promoter Eddie Hearn adds.

It’s a pay-per-view fight which could sell out Wembley stadiums in hours, if not minutes. It has the potential to transcend the world of boxing and appeal to the casual sport fan.

Now back to the current day. More than six-and-a-half years have passed and the two are yet to trade punches.

Khan, 34, and Brook, 35, are arguably past their peak both in terms of in-ring ability and public profile, but it seems they may finally settle their rivalry in the ring.

Brook told IFL TV last week he had signed contracts for the fight to take place. Khan replied by saying he hopes “something gets finalised this week”.

So Khan-Brook looks to be closer than ever and the ‘grudge match’ angle between two former champions will likely make it a marketable fight but, for the majority of fans, it’s well past its sell-by date…