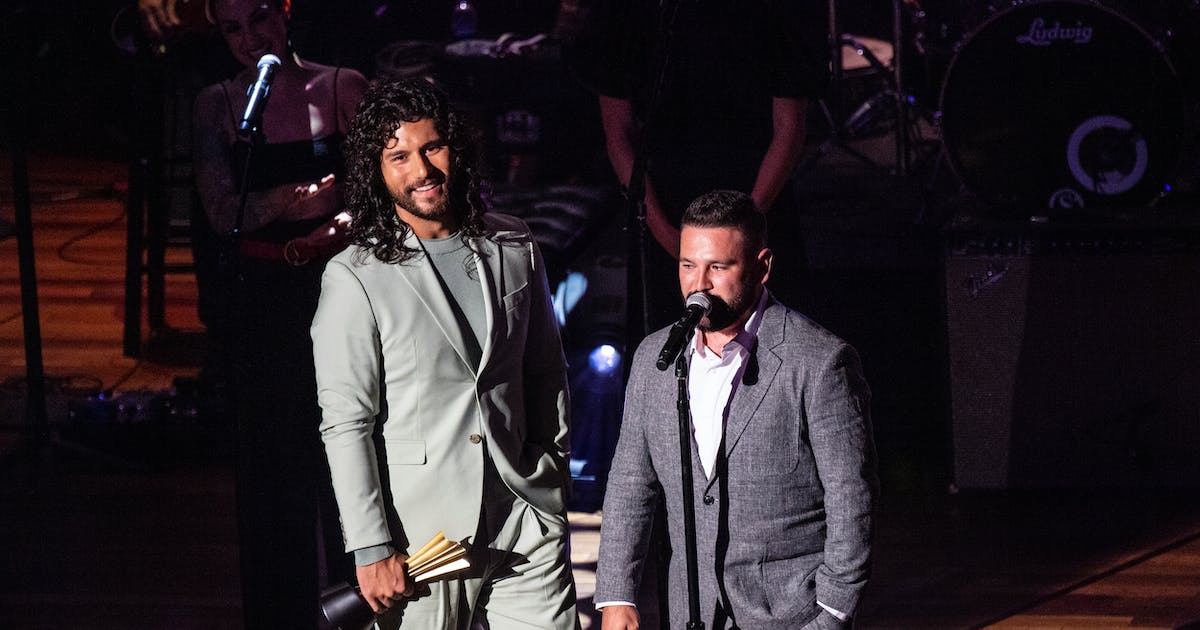 Not only is it in the moniker of country music’s hottest duo, it’s their de facto logo, an icon on much of their merch (dig those socks covered in ++++), and the shape of their satellite stage on Saturday night at sold-out Target Center in Minneapolis.

The plus sign also can be used to explain the success of Dan + Shay’s performance at Target Center: incurable romanticism + boundless energy + eager-to-please enthusiasm + imaginative production.

With his luxe tenor, Shay Mooney possesses the prettiest male voice in Nashville since Vince Gill, only with more range and depth. He sounded almost Freddie Mercury-like on Saturday on “I Should Probably Go To Bed” and soared on the choruses of “Speechless,” Dan + Shay’s defining power ballad filled with lyrics about love, romance and devotion.

Mooney was much more physical and demonstrative than at the duo’s 2019 performance at the Armory in Minneapolis. It was pretty obvious at Target Center that the lead singer, 29, had tons of brotherly love for Dan Smyers, 34, the songwriter, multi-instrumentalist and producer who provided vocal harmonies and played guitar and piano onstage.

On Saturday, the overly exuberant Smyers tried hard to play the casual rock star, with tight jeans, Prince & the Revolution T-shirt, and Robert Plant hairdo circa 1974, fluffed by a floor fan like Beyonce uses in concert.

A hypeman with oodles of energy, Smyers might have barely edged Mooney when it came to ingratiating comments on Saturday. How many times can you tell 14,000 fans that they are the loudest singers and craziest audience ever? The Prince T was a nice nod to Minneapolis but then switching to a Vikings T shirt at intermission and touting his next door neighbor in Nashville, Jared Allen, the ex-Viking, seemed unctuous.

Speaking of the intermission, it was one of the only minuses in a show of pluses. Since there were two opening acts, the break one hour into Dan + Shay’s set seemed unnecessary, especially since Act II — a nice balance of stripped down tunes and big full-band hits — was only 40 minutes long.

Otherwise the production was impressively creative for the pair’s first foray at headlining in arenas. The use of the plus-shaped stage in the middle of the venue for three different segments (including the opening) not only created more intimacy but also more variety. The main stage was minimalist, with four backup musicians on risers and a triptych video wall featuring lyrics, live video and appealing graphics.

Even if their musical aesthetic is more Air Supply (the 1980s yacht rock duo) than Brooks & Dunn (the enduring country pair), Dan + Shay have the right instincts when it comes to entertaining modern-day country crowds. Give them one more plus – a B+ for their first arena tour.

Colorado-reared singer-songwriter Ingrid Andress offered one of the more emotional opening performances witnessed in an arena. “Thank you for making me cry for the first time ever onstage,” she said after her fifth and final song.

What happened was when her sang her hit “More Hearts Than Mine” — about how a romance involves relationships with her entire family – the crowd spontaneously held up lit cellphones. And she teared up with her parents, who live in Grand Marais, Minn., in attendance.

“That has never happened to me before,” Andress said at song’s end. “That was pretty beautiful. I think I’m going to retire now.”

She probably shouldn’t. With her Sara Bareilles-evoking pop, Andress has a promising future whether in country or pop.