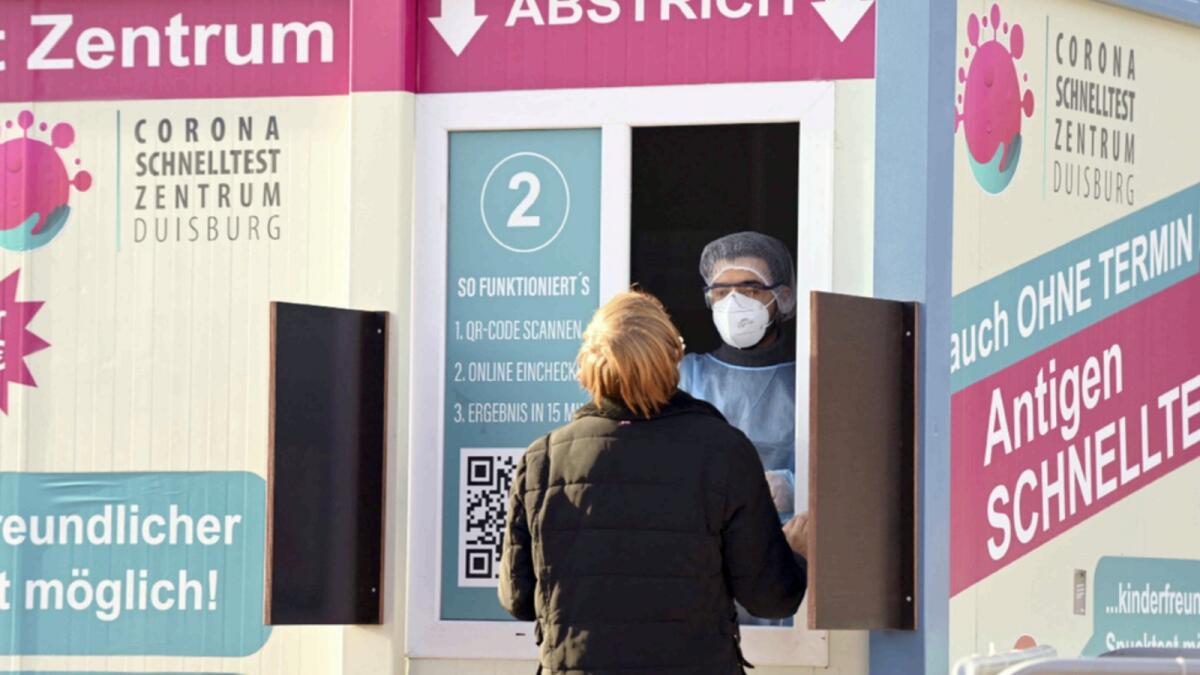 The number of unvaccinated, the waning efficacy of vaccines and complacency after governments lift curbs bring another wave

A man is tested at a Corona testing station in Duisburg, western Germany

After more than a year of lockdowns and other restrictive measures, vaccines offered Europe the hope of a return to freedom.

But the number of unvaccinated, the waning efficacy of vaccines and complacency after governments lifted restrictions have converged to bring yet another wave in the Covid pandemic. And it isn’t just affecting less developed areas of Europe.

Staid and sensible Holland is on the list of greatest concern while Germany registered record numbers of daily infections last week. Austria just mandated that all unvaccinated citizens must stay home while the inoculated can lead normal lives.

According to the WHO, Europe is the only region in the world where both infections and deaths from Covid are steadily increasing for the sixth consecutive week. Of 3.1 million new cases globally, nearly two-thirds, some 1.9 million, were reported in Europe, up 7 per cent last week. With booster shots and other programmes in the works, can Europe still look forward to a relatively normal holiday season? Only if strict protocols are enacted and the general population complies – factors that loom large today and could prove unrealistic. Germany finds itself in a most unfamiliar situation: On a list of something out of control. And a dreadful list it is. Last week it joined the US, the UK and Russia as countries topping the ranks of most new daily Covid-19 infections.

It is not what was expected in early autumn. After the pandemic cancelled the country’s renowned Christmas markets last holiday season, Germans were looking forwards to again enjoying some Glühwein (mulled wine), roast chestnuts and the traditional range of arts, crafts and fairground amusements on offer in market squares from Bavaria to Schleswig-Holstein.

Though some are still determined to go ahead, the price could be high. Health Minister Jens Spahn warned “we must now do everything necessary to break this momentum, otherwise it will be a bitter December for the whole country”.

In its weekly report the Robert Koch Institute, Germany’s public health institute, said it “urgently advises canceling or avoiding larger events if possible, but alsoreducing all other unnecessary contacts”.

Noted virologist Christian Drosten warned that Germany faces a hard-to-control situation that could lead to tens of thousands of additional deaths if authorities do not reintroduce tighter measures.

“We need to be able to control infection activity again, and testing is not an adequate way of doing that,” said Drosten. “We are in an emergency situation. When people change their behavior and take the threat more seriously, that has an effect.”

Austria, which has also joined the ranks of nations with soaring numbers of new infections, is taking the threat seriously enough to create two classes of people: those vaccinated who have full rights, and those who are not whose rights of movement are severely restricted. On Sunday, Austrian Chancellor Alexander Schallenberg announced a nationwide lockdown of people who have not been fully vaccinated or recovered from the virus.

“The aim is clear: we want to give the green light to national containment of unvaccinated people,” Schallenberg said. The regional state of Upper Austria and the city-state of Salzburg, which have seen some of the highest infection rates, had already introduced the lockdown. In the lockdown that affects about two million of Austria’s 8.9 million people, those over the age of 12 who have not been double-jabbed are now only allowed to leave their homes for work, school, exercise and buying essential supplies.

Another European nation not normally known for causing concern, the Netherlands, has also seen infections skyrocket, so it will go into a three-week partial lockdown, caretaker Prime Minister Mark Rutte said in a televised address

“Tonight we have a very unpleasant message,” he told the Dutch people and announced a lockdown starting Saturday night that means bars, restaurants and supermarkets must close at 8pm and non-essential will stores shut their doors at 6pm. Professional sports will be played in empty stadiums and people are being urged to work from home as much as possible.

Experts say low vaccine uptake and high vaccine hesitancy, not lack of availability, are largely to blame. The joint procurement of vaccines by the European Union meant all 27 member states were able to buy equivalent quantities of vaccines.

Part of the shortfall is a lack of confidence in governments. At least one in three people in Eastern Europe do not trust their country’s healthcare compared with an EU average of 18 per cent, according to a European Commission poll.

As the grey skies of winter arrive across many regions of Europe and residents break out their warmer clothes, many are hoping the freeze will not extend to their holiday cheer. Unfortunately, governments and experts are warning there are likely some chilly days ahead.