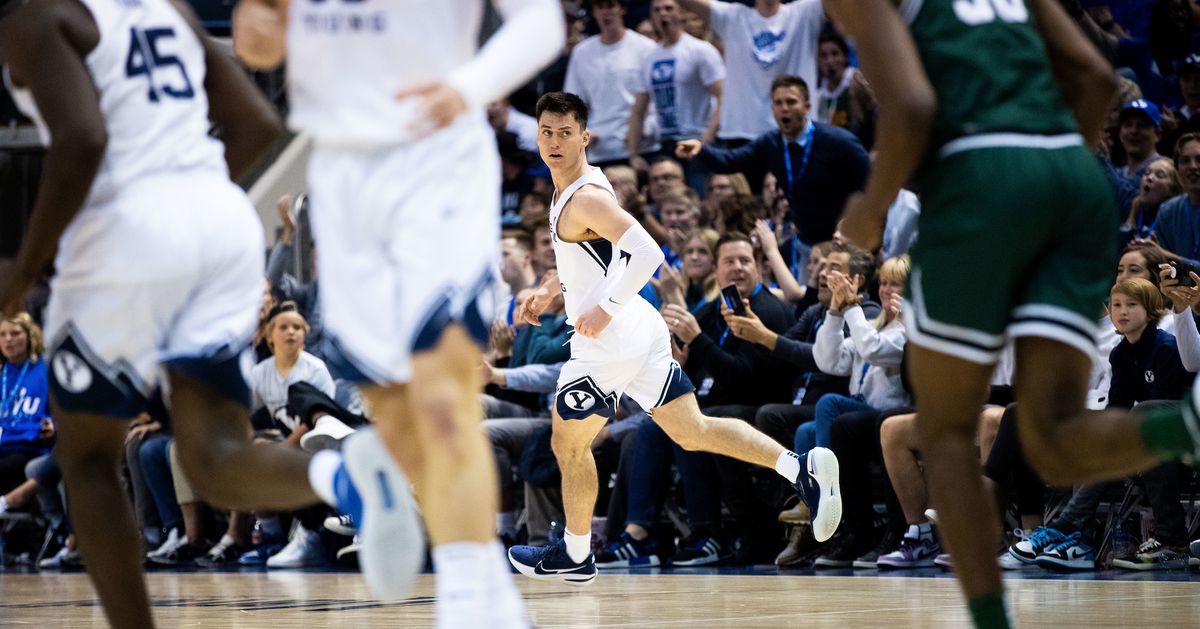 PROVO — BYU’s basketball rivalry with San Diego State has been around for years, highlighted by the epic matchups between Jimmer Fredette and Kawhi Leonard a decade ago.

It’s heated up again since the two programs have met the past two seasons. And those two games were memorable ones.

In 2019, the Aztecs edged the Cougars at the Marriott Center, 76-71. It marked coach Mark Pope’s first defeat as BYU’s head coach.

In 2020, at an empty Viejas Arena, the Cougars almost blew a 17-point lead in the second half before Brandon Averette knocked down a 3-pointer with 52 seconds remaining as BYU held on for a 72-62 victory over the No. 18 Aztecs. It snapped the Cougars’ four-game losing streak to SDSU and spoiled a 35-point performance by Aztecs guard Matt Mitchell.

BYU and San Diego State collide again Friday (7 p.m. MST, BYUtv) in front of what is expected to be a huge crowd at the Marriott Center.

“I love this matchup. It was so devastating when we lost here two years ago,” said Pope. “And then it was such a rush when we got to win there last year. We’re kind of like two top-25, mid-major-ish, not-in-Power-Five, conference teams.”

Meanwhile, as a backdrop to this game, the Cougars are riding a lot of momentum, having accepted an invitation to the Big 12 starting in September 2023. Then on Wednesday, they received a major commitment from Collin Chandler, one of the top shooting guards in the country.

Rivalry aside, Friday’s BYU-SDSU game is a big preseason showdown for both teams. It’s considered one of Friday’s top games nationally and both teams are looking to build their NCAA Tournament resumes.

“We beat them at their place two years ago, they beat us at our place last year. So home court has not held up the last two meetings. So hopefully, that continues where we can get into Provo and find a way to sneak out a win against the good BYU team.” — San Diego State coach Brian Dutcher

Last season’s win in San Diego contributed to the Cougars earning a No. 6 seed in the NCAA Tournament.

Pope is grateful that SDSU coach Brian Dutcher has been willing to continue the series.

Dutcher knows this is a great opportunity for his team, too.

“We beat them at their place two years ago, they beat us at our place last year. So home court has not held up the last two meetings,” he said. “So hopefully, that continues where we can get into Provo and find a way to sneak out a win against the good BYU team.”

Following the Aztecs’ win last Tuesday, guard Trey Pulliam made it clear that he hasn’t forgotten what happened last year.

“It’s definitely a game that we want to win,” he said. “We want to get that one back.”

“I love it. I’m looking so forward to it. I don’t know if you call it a rivalry but there’s some tension with San Diego State,” said senior guard Alex Barcello. “It’s fun to play teams that are really talented. I think they’re a tournament team this year. They’re going to have a great season like they always do.”

What does Cougar guard Spencer Johnson remember about last year’s upset of SDSU?

“I remember that we got a win. We’re looking to do it again this year,” he said. “Their defensive scheme was really good. We punched them in the mouth coming out and they tried to creep back on us. We came out with a win in the end. It’s going to be a really fun one. Plus, we’re going to have fans. Last year, there was an empty gym. That was a little weird. But getting our fans in there is going to be huge for us.”

Pope has said that he wanted to put together a difficult preseason schedule because he knows it will show his team how it can improve.

“It’s fun because, like (against Cleveland State), it shows us what we’re made of and it shows what we need to get better at,” Barcello said. “We do come out with some positives. It’s going to be another test to how good we are on Friday. They’re a really tough team. They’re going to come in here and try to knock us off. I’m definitely looking forward to it.”

Barcello scored a game-high 24 points, and made 13 of 13 from the free-throw line, against Cleveland State, while forward Caleb Lohner grabbed a game-high nine rebounds. Johnson scored 13 points, including two 3-pointers, and finished with three rebounds and a key block in the game’s final minutes.

“It’s huge. We have a lot of new guys that have come in and are learning our system,” he said. “They’re learning how we do things and I think we responded beautifully, how we played together. We fought through frustration and we hung in there. That’s what I was so happy about.”

The Cougars are hoping for another happy outcome Friday night.

Get the inside scoop on your favorite team in this email for true Cougar fans.