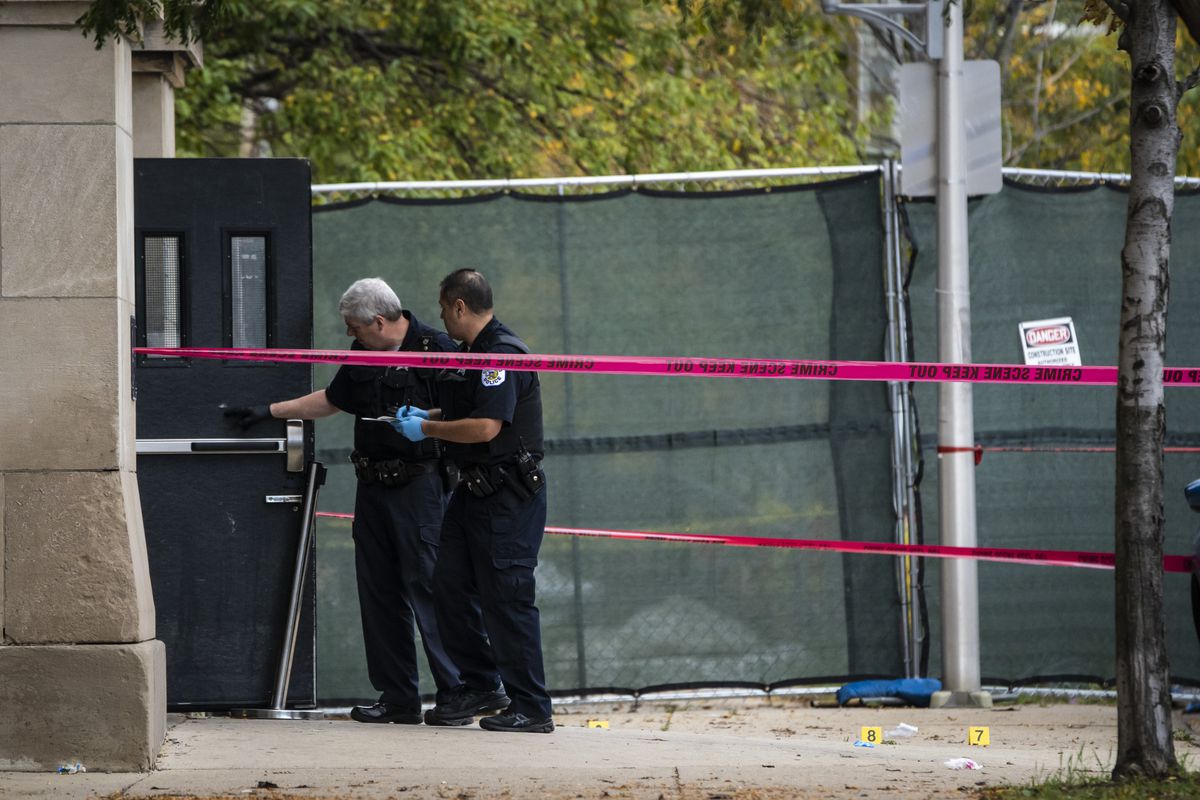 A 14-year-old girl and a security guard were seriously wounded when a gunman standing outside a Bronzeville high school started shooting as the guard was opening a door to let students out.

The girl and the 45-year-old man were shot around 3:20 p.m. outside Wendell Phillips Academy High School in the 3800 block of South Giles, according to a statement from Chicago police.

The girl was shot three times in the abdomen and taken to Comer Children’s Hospital in critical condition, according to police. The man, shot at least six times, was taken to the University of Chicago Medical Center in fair condition.

The family of the girl said she was “alert and she was speaking” before undergoing surgery. “She’s doing okay,” her grandmother Johneece Cobb told the Sun-Times.

Cobb, an active member of the group Purpose over Pain, said family was already gathering today to remember the life of her nephew Edwin Cook.

Cook was fatally shot in 2015 and Tuesday would have been his 26th birthday. While Cobb said her granddaughter is expected to recover, she worried how the girl will cope.

Chief of Detectives Brendan Deenihan said the guard had just opened one of the doors when he was hit. The girl apparently had just walked out of the doorway.

“The security guard opened up a door and immediately there was an offender in the street area who started shooting in the security guard’s direction,” Deenihan told reporters outside the school.

“The door opens and the guy immediately starts shooting, we do not know if it’s targeted or not,” he said. “The offender fled on foot and may have gotten into a vehicle.”

Students said the doorway where the girl and guard were shot is a popular exit for students heading home. Students were sent back into the school and told to wait for a family member to pick them up. Parents ran under police tape to reach their kids.

As of 4:30 p.m., Marrissa Martin still had not been able to find her daughter. “I’m still looking for her, she didn’t call my phone or nothing. I don’t know if she was scared and went to her friend’s house and her phone died.”

Martin is an alum of the school and said she has never heard of anything like this happening to students or staff on campus.

Michelline Joseph came to pick up her senior son and was shocked to learn what happened.

“Kids should never have to go to school under that kind of environment, situation,” Joseph said. “These are good kids, they all come from good backgrounds, their parents work.”

Martin said she does not plan to send her daughter back to school this week. “She won’t be back here for a while,” Martin said. “She’s probably shaken. She’s a sophomore in high school.”

Reggie Thompson’s children don’t go to Phillips anymore but they walk by the school on their way home. His heart started racing when they wouldn’t answer their phones.

Panicked, he rushed to the school from work, praying they were OK. He pulled up in an alley and ran out of his truck, frantically asking, “What happened, Where are my kids?”

Moments later, he spotted his 14-year-old son and 16-year-old daughter walking down an alley carrying grocery bags, returning from a trip to Mariano’s.

He was relieved but scolded them for not answering their phones. “Please answer your phones, that’s why you got them,” he said he told them. “My heart was gone, I was numb for a minute. Prayer do work.”

Thompson said he transferred his children out of Phillips to Dunbar about a month ago to avoid dangerous situations. “This is one of the reasons why. They just said themselves I’m glad you transferred us,” he said.

“The times have changed,” he continued. “The streets have no discipline anymore, and that’s what’s happening. People have no consequences. If they do something, they feel like no one can tell them what to do, so it’s easy for them to do anything.

“It’s scary these days, it’s not like it used to be,” Thompson said. “My heart is still beating fast right now.”

In September, two 15-year-old students from Simeon Career Academy were shot and killed on the same day in separate attacks, one of them not far from the South Side campus.

“It’s ridiculous, you know the kids have to go to school, it’s just very unsafe now because we don’t know if the kids are gonna be safe going to school or picking up after school,” said an employee of Chicago’s Home of Chicken and Waffles restaurant, around the corner from Phillips.

The employee, who did not want to be named, said they heard about four or five shots, then saw police cars flood the area.